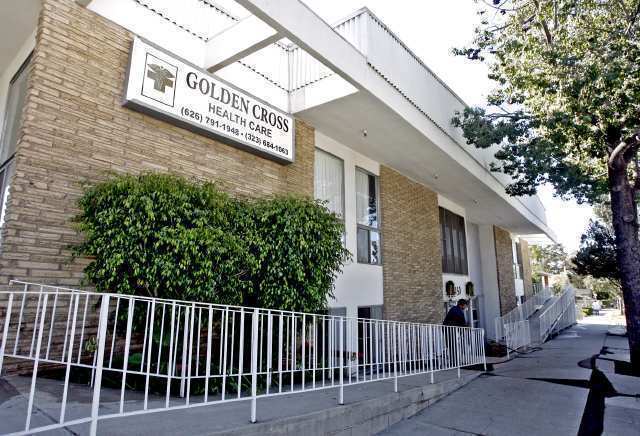 More than 60 residents were evacuated from a skilled nursing facility in Pasadena late Thursday after the state suspended the facility’s license because of “ongoing and serious quality of care concerns,” including some related to the coronavirus outbreak, officials said.

“They had several COVID-positive patients but they were stable,” Derderian said “But other concerns included elder abuse allegations that our police department is investigating, and neglect.”

Golden Cross has reported a total of 72 coronavirus cases among residents, and eight have died, according to the most recent data from the Pasadena Public Health Department. In addition, 32 staffers have also contracted the virus.

Derderian said the city had identified at least 10 possible violations of state or federal laws at Golden Cross, including allegations the facility was failing to provide adequate nutrition and basic medical care to residents. The state is expected to play a major role in investigating and possibly prosecuting the facility, she said.

In emails provided by the city, a fire battalion chief wrote Wednesday that he’d visited Golden Cross the day before and asked whether there were any patients in “immediate jeopardy,” and whether any had unstable vitals. Staff told him no, the chief wrote.

On Wednesday morning, an official with the city’s Public Health Department visited the facility and learned that there were more than six “immediate jeopardy” patients, the emails state. Later Wednesday, a fire official wrote that there were nine such patients.

“We found the facility outright lied to us about the condition of some of the patients there,” Derderian said.

A message left for an administrator of Golden Cross was not immediately returned Saturday.

The city became aware of the situation several weeks ago, when inspections indicated that Golden Cross was not abiding by coronavirus-related health officer orders issued for senior care facilities, Derderian said.

City officials immediately started working with licensing agencies and the state to try to rectify the concerns, but Golden Cross failed to take corrective action, she said.

“They had numerous opportunities to correct several issues, and these issues included the most fundamental functions of caring for these patients: sufficient nutrition and water, and basic medical needs,” she said.

About two weeks ago, a medical assistance team with the state Emergency Medical Services Authority was sent in to help run the facility, followed by a National Guard medical team, Derderian said. Both teams “reported concerns about the poor quality of care and lack of improvement when the state issued multiple plans of correction,” she said.

The situation came to a head Sunday, when Pasadena’s fire chief and health officer visited Golden Cross to assess the residents and “personally saw that if we didn’t take action swiftly, some of these patients could decline quickly,” Derderian said.

“So that’s when we were more aggressive with our reaction with the regulatory agencies to say, ‘We need to move these patients out,’” she said.

The California Department of Public Health issued a temporary suspension order for Golden Cross on Wednesday, the department confirmed. It was the first time a skilled nursing facility in the state had its license suspended since the coronavirus outbreak began, a representative said.

The department declined to provide additional information about the specific allegations that prompted the suspension.

The state also served the facility with an accusation to revoke its license to operate, Derderian said. Golden Cross can appeal the suspension order, but it gave the state the authority to depopulate the facility in the meantime, she said.

The state Attorney General’s Office ordered that residents be evacuated Thursday, she said.

It took 12 hours to find new facilities for all 63 residents and prepare them for transfer, and more than 30 private ambulances to transport them, Derderian said. The effort was coordinated by the city fire department, and a representative for the Department of Justice was also onsite, she said.

Though a large percentage of patients at Golden Cross had tested positive for the coronavirus, none required hospitalization, Derderian said.

All residents have now been removed from the nursing facility, though some staff may have remained, she said.

The facility has a history of complaints stretching back over a decade.

A health inspection report from April noted more than a dozen deficiencies, including failing to obtain informed consent from residents before giving out medication, to provide appropriate ulcer care, to implement plans to prevent falls, and to properly label and store medicine.

In one instance cited in the report, a resident had a catheter inserted and the facility failed to follow up with the urologist to have it removed, risking a decline in or loss of the patient’s bladder function, inspectors wrote.

Similar deficiencies were noted during inspections conducted in 2018 and 2017, according to reports released by the U.S. Department of Health and Human Services.

In March 2018, the facility was cited after a caregiver, who appeared to be drunk, threw juice at a resident’s face, according to an inspection report.

Authorities also cited Golden Cross Health Care in 2012 after state investigators found the facility failed to treat and prevent wounds, offered poor psychotic drug practices and failed to note cases of dehydration. An open wound on one resident was found to contain maggots, according to a report issued at the time.

In 2008 and 2010, state officials substantiated complaints regarding issues including patient care and treatment of sores.

“It’s a shame when the owners look at it as a business and have no care or compassion for these residents,” Derderian said. “They were basically heartless when it came to these residents that are under their care.”