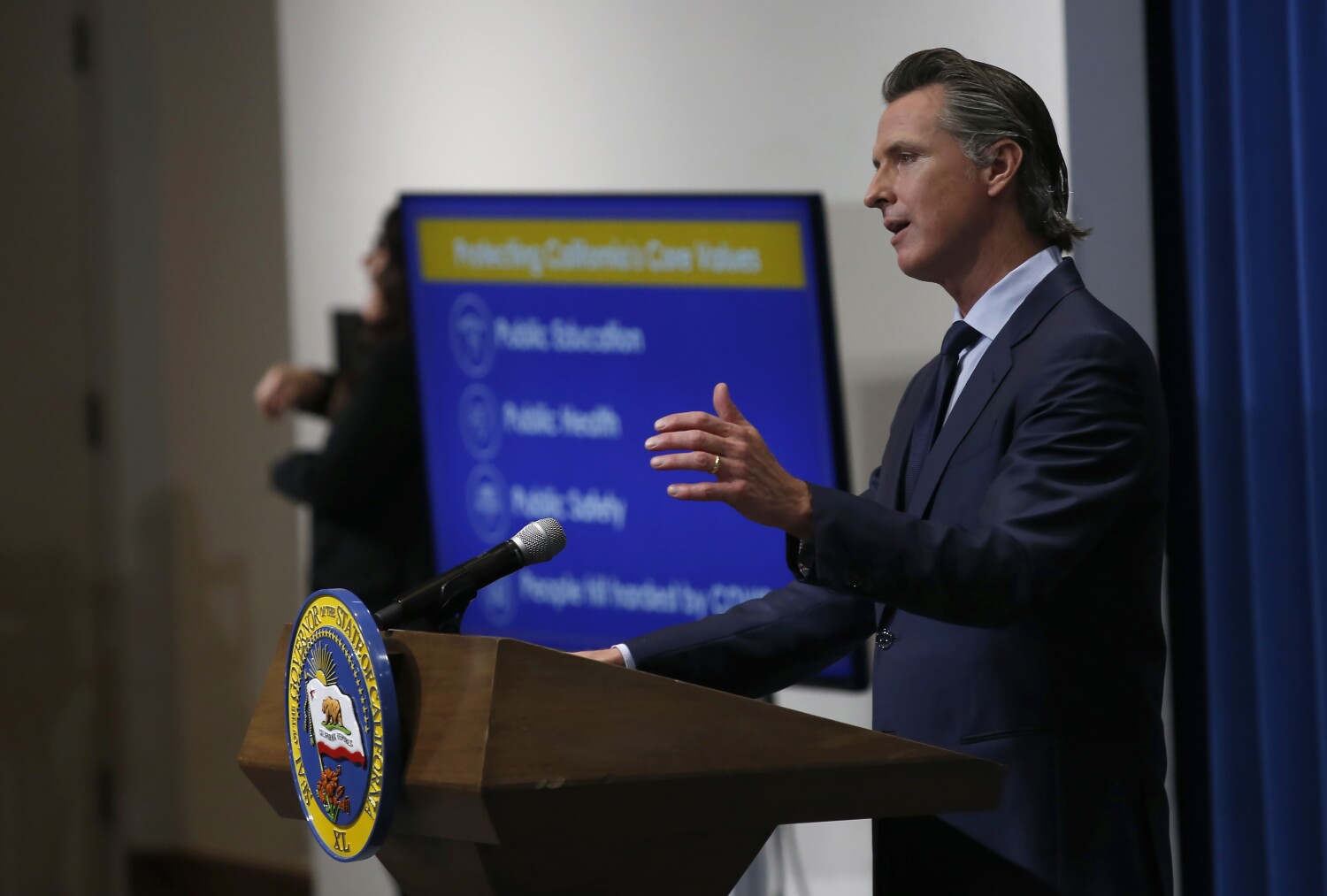 The aged, blind and disabled always get the shaft whenever a governor pulls out his cutting knife.

So it was no surprise on Friday when 1.2 million Californians who are aged, blind or disabled and living on the edge — clinging to government benefits for subsistence — got whacked again, this time by Gov. Gavin Newsom.
Many Californians were dinged in Newsom’s revised state budget proposal. And most of it couldn’t be helped without a major tax increase.

The governor and Legislature have a projected $54-billion budget hole to fill because the economy was practically shut down in mid-March when Newsom ordered most people to stay at home to slow the spread of coronavirus.

That will reduce state government’s tax receipts by an estimated $41 billion through June 2021 compared with what Newsom projected when he sent his original budget proposal to the Legislature in January. His revised spending plan totals $203 billion, down $19 billion from what he first proposed.

“Nothing breaks my heart more than making budget cuts,” Newsom told reporters. “There’s a human being behind every single number. A dream that’s being deferred. A dream denied….

“I recognize these cuts are devastating to so many people.”

Newsom, legislators and the public don’t have the stomach for a broad-based tax hike on income, sales or business. Especially not in an election year.

The governor proposed some narrow tax boosts. They’re expected to net $4.4 billion for the fiscal year starting July 1. One would be a vaping tax on e-cigarettes. Two others would mainly tap businesses — suspending “net operating loss” and “incentive tax credit” loopholes.

“We can work with that,” says Rob Lapsley, president of the California Business Roundtable, referring to the loop hole closings. “It has happened in previous budgets.”

What has also repeatedly happened is the state hitting up SSI-SSP, generally lower-profile compared to CalWorks — welfare — and Medi-Cal, healthcare for the poor.

The way it works is this: The federal and state governments make sure there’s a minimum monthly income for anybody who is aged, blind or disabled. If a person doesn’t have enough outside income or Social Security to reach the minimum standard, the feds kick in what’s called Supplemental Security Income, or SSI. States can also add extra money, which California does. That’s called the State Supplementary Program, or SSP.

Here’s the California sin: The Social Security Administration annually calculates inflation and adds a cost-of-living adjustment to its monthly benefit. And when budget balancing is tough in Sacramento, state politicians routinely seize that federal COLA meant for the aged, blind and disabled. They toss it into the state’s general fund.

The governor and Legislature do that by cutting the state SSP payment by an amount equal to the federal COLA.

It’s not much money by most people’s standards, but every dollar means a lot to people living on the edge. Budget writers in the state Finance Department estimate the federal COLA starting Jan. 1 will be $9 for single people and $13 for couples. Their monthly checks will remain the same, but the state will rob them of the feds’ intended COLA.

Newsom expects the state to net $33.6 million from the heist.

“It always mystifies people,” says Marty Omoto, executive director of the California Disability Community Action Network. “They ask, ‘How can the state take away the federal cost-of-living increase?’ Technically they don’t. They just take away part of the state portion….

“Food prices have gone up because of shortages. Now the state is taking away their cost-of-living adjustments.… Targeting them is incomprehensible. [It’s] stealing money legally.”

Moreover, Newsom is proposing to save about $68 million in general fund money by scrubbing the planned expansion of Medi-Cal for some SSI-SSP recipients.

And these people also are getting smacked another way: The governor is cutting back on In-Home Supportive Services, a program to help frail people with their personal tasks.

“This entire population is the most vulnerable to coronavirus,” Omoto says. “The state is taking money away from the exact population it is trying to protect. It does have to take some steps to balance the budget, but why would you do that?”

Answer: Because it’s easy. These people don’t contribute to election campaigns. They don’t have powerful lobbies in Sacramento. They’re not represented by unions or corporate interests.

Newsom says he’ll forget about these and other budget cuts if Congress and President Trump deliver lots more virus relief to the states.

But, come on: The federal government provides COLA increases practically every year and is expected to again in January. The feds have done their job for the aged, blind and disabled.

What Newsom is proposing seems robotic, unnecessary and insensitive toward California’s most vulnerable.